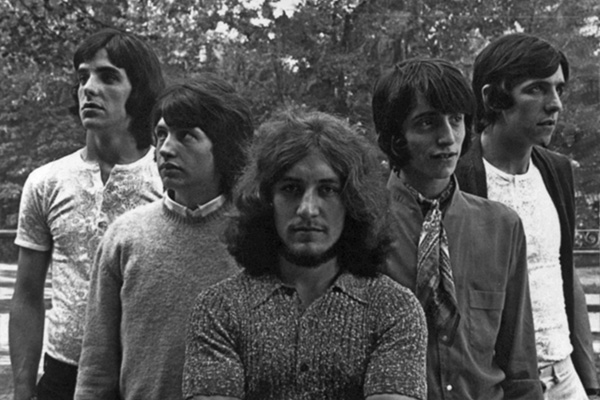 LEOK´K was founded in the year 1968 in the town of Zestoa. Five young men got together wanting to offer a different style of music, different to that which was heard, at the time, in our near environment. We made our appearance basing our music mainly on the British music group The Beatles.

Our first performance took place in May of 1969 at the “Eliz-Ondo” cinema of Zestoa. After that, we performed in a number of different town festivals, mainly along the coast of Gipuzkoa and Bizkaia. We also gave recitals at dancing clubs and weddings. In 1972 our music work was interrupted by the “blessed” military service, and due to this fact, LEOK´K was dissolved as a music group.

During our musical career, when the Spanish dictator Franco was in power, we tried to contribute, in a small way, to the Basque song. Not only were we the first rock group in our shire, but were also one of the pioneers in singing that style of music in the Basque language.

In 1992 we participated, together with other groups, in a concert held in Zestoa. The said concert was organized in order to celebrate the 25th anniversary of the rock movement in this shire. And this is when Koldo Igual joined LEOK´K, filling the place left by Alejandro Kortadi, a friend and founding-member of the group, who died in 1978 in an unfortunate car accident.

A similar festival was held in 2002 during the town festivals in which we were very glad to participate. These sporadic performances, made us think that we could do and offer something more.

With this wish in mind, considering the activities and campaigns organized in the town to help the Western Saharian people on one hand, and on the other, the fact that one of the members of our group took into his home during a number of Summers, a little Saharian girl, this all lead us to immerse ourselves in this project. We were very conscious of the situation in Western Sahara and were sensitive with it.

What mainly called our attention was the work realized by the Saharan women. It is known, that the majority of the Saharan men are mobilized and that due to this, the women have taken charge of the local administration as well as the social and economical life in addition to their daily chores. Taking all this into account, as LEOK´K we decided to express our solidarity with the Saharan people and specially with the Saharan women by offering them our friendship. And this is how this elaborated and well worked project came about. 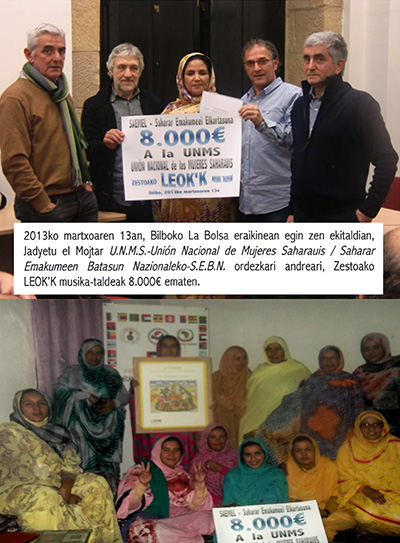 Once the project got under way and after two years of work and preparation, on the 2nd of September 2006, we presented our first record: “Saemel” (abriviation of the Basque words “Saharako emakumeei elkartasuna”) at the concert we offered in the main square of the town of Zestoa.

Four years later, on the 4th of September 2010, coinciding with the festivals of the town of Zestoa, we presented a second record with the title “une bat …”. The object of this second record was the same as the one for the first recod and all within the Saemel project.

With the project underway, fully involved in concerts and performances, in 2013 and as a result of a serious illness, Sebastian Etxeberria, the group's drummer, left us. David Gorospe (Mini-Leok´k, Luma, Leize etc.) entered in his place. Months later, and preparing the tribute to Sebastian Etxeberria, Jesus Aramberri (Blue Shadows, Luma, The Young Wait) joined the group sharing keyboards with Gotzon Lizaso.

In mid-June 2015 and for personal reasons, Mitxel Orbegozo singer of the group left the group, so the member and guitarist Luis Llavori took over the microphone. In early 2016 also for personal reasons, Luis Igual, the hitherto bassist, left the group. In 2017, in full preparation of the third album, Alfonso Guilló (Expresion Sonora, Koska, Aterri, etc.) joined the group replacing Luis Igual. In this way we were able to resume the trajectory of the project again with the following components: Juan Antonio Kortadi: guitar and choirs, Gotzon Lizaso: piano, synthesizers and choirs, Luis LLavori: guitar and lead vocals, David Gorospe: drums and percussion, Jesus Aramberri: hammond organ and pianos , and Alfonso Guilló: bass, voice and choirs.

So, placing ourselves in this context we took another step in 2018, since 50 years have elapsed since the creation of the group, we were immersed in the preparation of our third work “Infinituari segika” to commemorate the 50th anniversary of LEOK´K and present it at an attractive concert in September 2018 in which all those who in one way or another were members of the group were invited to take part: MItxel Orbegozo and Luis Igual and other participants in the LEOK'K project as Anjel Fernandez, Nerea Ugarte, Idoia Azurmendi and Adrian Larrañaga.

Summing up, the goal of the project of solidarity with the Saharan women is: To express to the Saharan people our solidarity and impulse, as well as offer them our humble support in their right to decide their own future. With the aim of contributing what we can in order to reach the said goal, we destine the profits obtained from the sales of these three records. “Saemel”, “une bat…” and the future one, “Infinituari segika”, to the organism “National Unity of the Saharan Women” (UNMS) in order to, in a little way relieve their economical needs the same as we did in 2012 by handing in the sum of 8,000€.

We must also have to say, that in order to carry all this out, we count with the approval and support of those responsable members and organizations in favour of the cause of the Western Sahara people. And of course, in order to enable us to carry out a project of these characteristics, the elabpration and implication of friends and different social agents are needed, and so has been in this case.

We wish to express our gratitude for the attention you have given us by reading this. We hope and wish that you will also be a co-participant in the solidarity and help to the Western Sahara people.